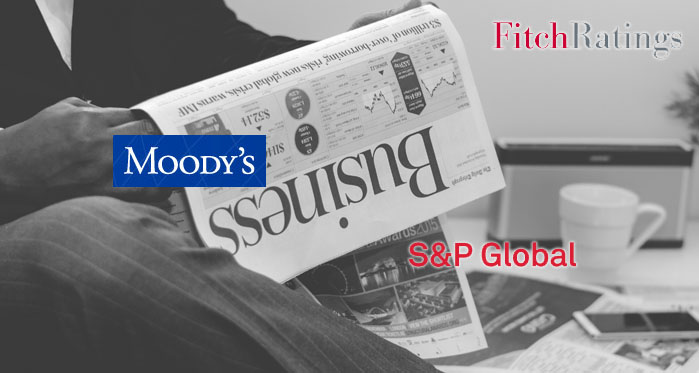 The Big Three credit rating agencies are Standard & Poor's (S&P), Moody's, and Fitch Group. S&P and Moody's are based in the US, while Fitch is has headquarters both in New York City and London. All three are private companies.

Credit rating agencies rate a country on the strength of their economy, by scoring governments or large companies on how likely they are to repay their debt. The rating given affects how much it costs governments to borrow money in the international financial markets. In theory, this means a high credit rating means a lower interest rate.

Impact on the Eurozone Crisis

The Big Three’s favourable pre-crisis ratings of Eurozone insolvent financial institutions and sub-prime mortgage market securities were the heart of the Eurozone crisis around 2008. Sub-prime mortgages could not have been marketed and sold without their seal of approval.

Since 2010, one or more of the Big Three relegated Greece, Portugal and Ireland to "junk" status, accelerating a burgeoning Eurozone debt crisis. In January 2012, amid continued eurozone instability, S&P downgraded nine eurozone countries.

The Big Three dominate the market. In 2011, the European Parliament Committee on Economic and Monetary Affairs advocated for more competition to create more transparent criteria for rating sovereign debt. In November 2013, credit ratings organizations from Portugal, India, South Africa, Malaysia, and Brazil launched ARC Ratings as a joint venture as a new and alternative global agency to the "Big Three".